SEAKR Engineering is honored to be featured in Breaking Defense News Article: 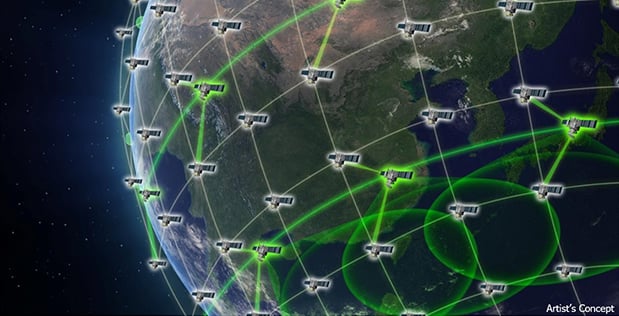 WASHINGTON:  DARPA’s closely-watched Blackjack program to explore how DoD can use commercial technology to develop a range of technologies — from communications systems to sensors to on-orbit data processing software to low-cast busses — for Low Earth Orbit (LEO) satellite constellations is pushing fast toward first launch in 2021, with a spate of contracts issued over the past couple of weeks.

Meanwhile, a set of three risk reduction experiments are being planned for rideshare launches (i.e. as payloads on rockets carrying other satellites) later this year, managed by prime contractors SEAKR Engineering and Scientific Systems Co. Inc (SSCI). “Each flight aims to verify and validate key technologies to be integrated into Blackjack satellites, to include high-speed supercomputing, optical inter-satellite links, ground software for tactical user access, satellite and constellation autonomy, and advanced processing, exploitation, and dissemination,” the two companies said in an announcement this evening.

On Friday, DARPA issued Raytheon a $37.4 million award to provide an Overhead Persistent Infrared (OPIR) sensor to be integrated into multiple bus designs and the Pit Boss cloud-based, autonomous mission management system for the constellation.  Lockheed Martin was chosen in late April as prime systems integrator for Phase 1 of the program. Pit Boss is being developed by SEAKR and SSCI.

Under the Phase 2 contract, Raytheon will “complete design, fabricate, test, and deliver in quantity space-flight ready OPIR payloads”  with work estimated to be completed in April 2023.

(Raytheon, along with the Northrop Grumman/Ball Aerospace team, is designing an IR sensor payload for the Air Force’s Next-Generation OPIR  system missile warning satellites. Raytheon’s Intelligence and Space unit on May 27 announced that its sensor had passed preliminary design review, and that the company is now readying hardware for next year’s Critical Design Review.)

On June 9, DARPA awarded a $16.4 million contract to SA Photonics in Los Gatos, California, for optical communications terminals for the various satellite busses to be delivered by next March.

Although Blackjack Program Manager Rusty Thomas told Breaking D in an email today that multiple bus providers remain in the competition, Blue Canyon Technologies in Boulder, Colorado on June 10 won a $14.9 million contract for busses to be delivered by June 2021.